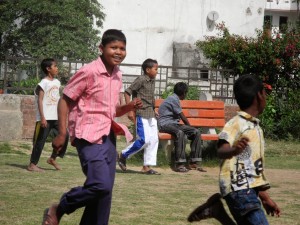 I wrote this story in an email dated back in January of this year (2013). Today I am sharing this with you because I am heartbroken that our dear Surendar has been transferred to a facility for mentally challenged children; a facility that is known for its lack of care for these unwanted children. Back in January, I saw God reach out and touch Surendar’s life, transforming him slowly and giving him hope for a brighter future. God gave me a great love for this boy, and others like him. I have not given up hope, and I will continue to trust God for a miracle. I trust that God will make a way for Surendar to get the chance to live in a loving home and experience the fullness of God’s love and grace yet again. Please remember Surendar in your prayers today…

Something remarkable happened the other day and I wanted to share with you. A new boy came to our home Sunday morning. The police found him on the roadside nearby. He is maybe 14 or 15 years old and severely mentally handicapped.

When he came through the door I could see his condition was so bad. His face, hands and feet were severely swollen, probably from the cold. He was covered in dust, human waste, and garbage. His hair was actually dripping with lice and at the top of his head was a festering wound. He could not walk without the help of two of our staff members who each held one of his arms, because his feet were badly swollen, probably from frostbite. The staff sat him down for the church service and he nervously looked around, occasionally murmuring, “Give me money,” in Hindi.

After church, our staff announced to the children that this new boy would be staying with us for some time and that he needed a lot of help and care. Then we all laid hands on him and prayed for him. After that he was bathed, his head was shaved, as it was infested with lice, and the religious threads were cut from around his neck. Then he was given new clothes, socks and a cap. That day he was very uncooperative and did not even make eye contact, but we all continued to pour out love and prayers upon him.

The next morning, he had breakfast and was given a bath. Then we sat him in a chair next to me for morning devotion. Suddenly, as our children sang Yeshu Tere Liye (Only for Jesus) the boy began to smile and even laugh, revealing the cutest little dimple on his left cheek! It was as if he started to realize that he was in a good place. Or maybe he felt God’s presence! After devotion the children crowded around him asking his name. He was trying to speak, but could not remember his own name. After a few hours one of our boys was asking him again and he finally told us, “Surendar”. Our children are so excited to see this transformation taking place right before their eyes, and I feel the same excitement.

My heart is really broken for this child, thinking, “Who is he? Where is his mom and dad? Has he ever been loved or cared for? How long was he alone on the road for? and How did he get to this point without even one person reaching out to help?” It is so hard to even fathom that we could allow our children to get to this condition. There are thousands and thousands in Delhi alone who are in the same condition as Surendar, or even worse condition. But God chose Surendar as well as 49 other boys to come to our Home. What an awesome opportunity to have a hand in God’s work of pouring out His love upon His precious children like Surrendar to transform them, to literally lift them from the ashes! Praise God!
***