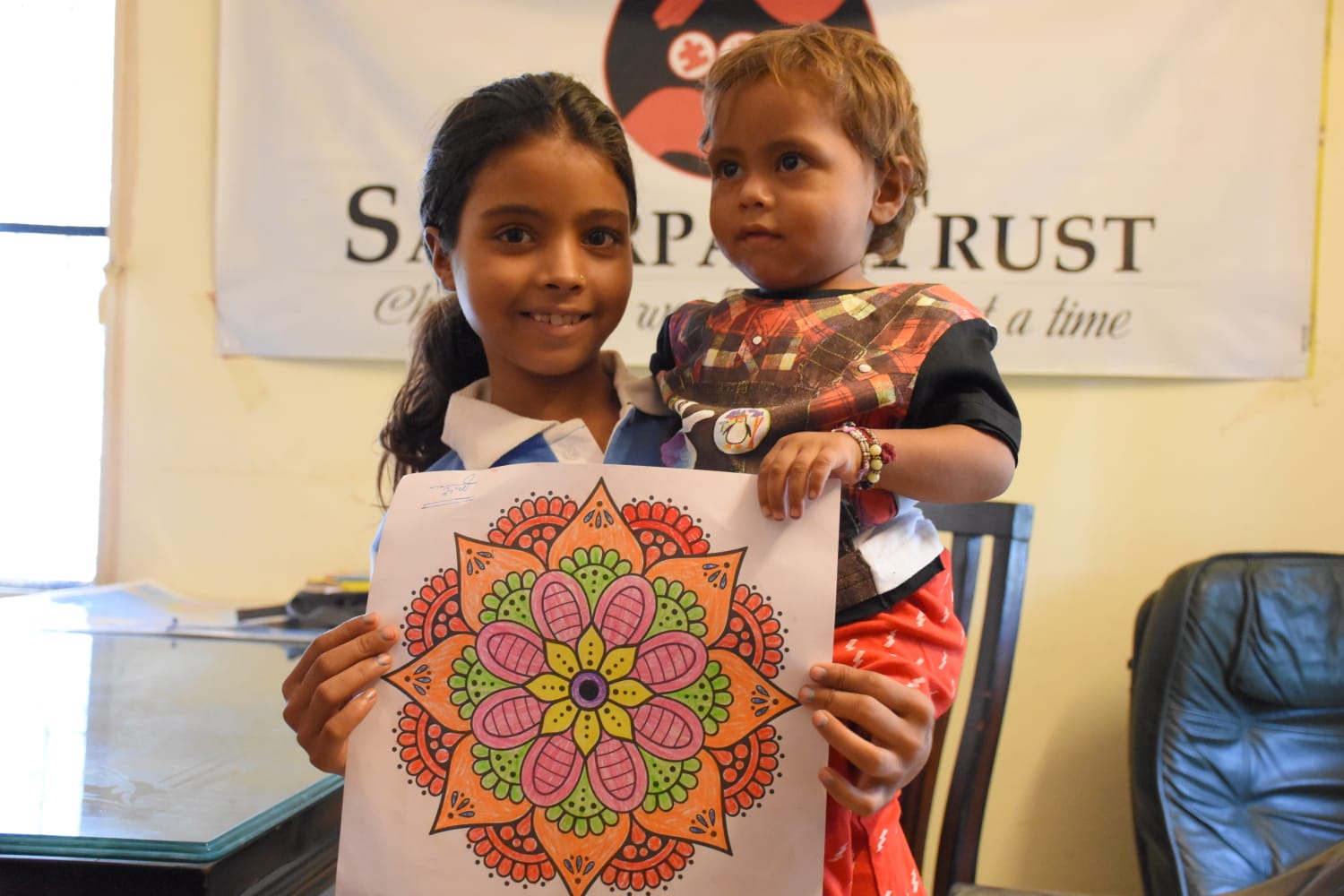 I met Ruchi and her little brother Rinku three years ago. Ruchi was only about 8 years old at the time, Rinku was just a baby in her arms, probably one year old, about the same age as my own son Vikramaditya. But Rinku was obviously much less developed than Vikram due to his harsh living conditions and lack of nutrition. Ashish, (4) and Neha (3) were also hand in hand. All of them wore tattered clothing; they were covered in dust, hungry and weak from the mid-day heat. They looked desperate for some kind of comfort, a sip of cold water, a place to rest their sweet little heads.

Ruchi was always so friendly with me, and I saw that her and her siblings’ were in need. So I invited them to our Home of Hope for a meal and to play with our children. Ruchi and her siblings showed up the next morning at 7am. They were wearing what I knew was the best clothing they could manage and their hair was perfectly combed. From that day forward, more and more children started coming to our Home of Hope and it bloomed into what we now call our DayCare for children living on the streets.

When I share Ruchi’s story, I feel like I am not only sharing her story, but I am sharing the story of the millions of children like her who live on the streets, caring for their younger siblings, denied any right to education, safety or opportunity. Ruchi’s life was so bleak. But when she entered our Home of Hope, she was a child again. She played, she studied, she joked and laughed. She handed Rinku over to our Housemothers who would then shower him with love and care. They gave him diapers, clothing, warm baths and toys. They held him in their arms when he slept, they scooped him up when he would fall down. He was loved. He was nurtured. Just like all of our children.

The unfortunate thing about children like Ruchi and her siblings, is their parents travel from the village to cities in search of work. They are unskilled laborers, often paid pennies a day to do hard manual work. They live on the streets and construction sites. They have to travel a lot and at a minute’s notice. While they were with us, Ruchi’s parents were working on a building construction. This construction was soon completed and Ruchi’s dad was searching for work, which he was unable to find. So he took his family and traveled back to the village.

It’s always hard to say goodbye, but it’s even harder when you don’t get to say goodbye. Ruchi and her siblings became such an important part of our family. We know that we constantly have to “Let go and Let God” in situations like this, realizing the limitations of our reach. We always hope that they will come back to us, which happens very often. So we waited and hoped for their return.

And they did return. One hot morning, we were having breakfast when our doorbell rang. we peeked behind the curtains seeing Ruchi and her mom, Archana, at the gate. Our kids shouted in excitement, “Yay! They came back!” running to greet them at the main gate. We live for moments like this. The indescribable beauty of moments like this is what drives us to fight for our cause. Life’s beauty, however, is inseparable from its fragility. Our happy reunion was met with mourning, “Where is Rinku?” Our housemothers asked. Archana began to weep. “Rinku is no more.” The weight those words carried in that moment is indescribable- weight that feels like it is crushing us even today- weight we have since learned to carry but which never ceases to push us to and beyond our emotional and spiritual, sometimes physical, capacity.

How do we express our feelings of pain and loss when the depths of these we can’t understand. Rinku’s life was cut short. It angers me; it saddens me deeply. As I held his weeping mother, she recounted how Rinku died in her arms. She wiped her tears and told me how she prepared 3-year old Rinku – her youngest, her baby – for his cremation. She wanted his fragile body to somehow reflect the beauty of his departed soul. She was proud of herself that she was able to manage this in the midst of her anguish. Her shaking hands combed his hair to the side, and as she brushed that last stroke of kajal over his lifeless eyes, Archana fainted. She blacked out, and it’s as if she is just waking up from that day now, three months later, at our Home of Hope, hundreds of miles away from the village where her son’s body was cremated.

I try to offer her some solace, wishing there was technology that would allow her to plug into me and charge up her strength so she could find the hope and ability to carry on for her 4 other children at least for the day. But all I have to offer her is my arms wide open, my ears ready to listen, my patience ready to be tested, my heart ready to be broken. Empathy is all I have; and I feel it is the most useless tool when faced with giants like this. I can never fully understand the pain of losing a child. What Rinku’s mom is going through, is one of humankind’s most agonizing and mystifying situations that so many are forced to face.

We all want to know WHY? HOW? But does it help? Does knowing why he died and the circumstances surrounding it help us in any way? Archana does not even know how he died. She said he was fine. One day he stopped talking. It was as if he was struggling to breathe. Archana and her husband carried Rinku from one hospital to another, begging for help. But every doctor said the same thing, “There is nothing we can do. Please take him home to die.” But Archana refused to give up on her baby, and Rinku ended up dying in her arms in the middle of a street on the way to another hospital. They then would travel two hours back to their village by bus with Rinku’s lifeless body in his weeping father’s arms.

Rinku’s death was most likely caused by an untreated pneumonia which spread to his lungs. But I believe Rinku died from poverty- to be more specific, he died from a lack of education, a need of women’s (mother’s) empowerment, scarcity of quality healthcare and absence of equality and rights for all human beings regardless of their economic standing.

Infant deaths in India remained the highest in the world, said the estimates released by Unicef, the World Health Organization (WHO), the United Nations Population Division and the World Bank Group in 2017. The report highlighted that most children under the age of five die because of preventable or treatable causes such as complications during birth, pneumonia, diarrhea, neonatal sepsis and malaria. Babies like Rinku should not be dying from lack of access. Children of migrant laborer families should not be subjected to the harsh living conditions of the streets. They deserve better. We have to do better for them.

One Life to Love is currently providing DayCare to Ruchi, Neha, Nittu and Ashish, while offering Archana a place to heal. Archana’s husband is still working as an unskilled laborer, but is desperate to provide a better life for his children and wife.

We are driven by the need of the children we serve. It was Pooja who inspired us to seek funding for building a Campus so we could provide a Girls’ Home. This Campus would also offer refuge for families like Ruchi’s, providing them with housing, work, education and access to quality healthcare. In times of loss, we can easily feel lost. When we have a destination in sight, the journey becomes easier. We have our sights set on this campus believing in the possibility of it all and convicted by the need for it.

In honor of Rinku, would you tell his story? Would you make a donation, say a prayer for his family and/or offer your services to help? I cannot think of a better way to mourn, heal and help his mother and siblings than to continue fighting the good fight, reaching more children like Rinku with help and hope.

Give to Our Campus Fund: https://www.gofundme.com/f/homeforgirlswithspecialneeds