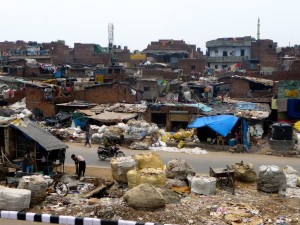 We walked out onto the balcony overlooking the slums. My brain could not process what my eyes were seeing. Poverty. I have learned much about the term; lived amongst people suffering from it; donated money and time to alleviate it, etc. But I don’t think I ever understood it until I walked out onto this balcony and viewed the slums of Ghaziabad on the U.P. border. If poverty were to have an image it would be this. Roofless, crumbling units stacked inconsiderately on top one another; tarps with tears and holes covered with mud and garbage used to accommodate the many family members that sleep on the dirt beneath them; mounds of garbage overlaid with men, women and children picking through its contents, indifferent to the filth and stench it exudes. A little girl, reaching slightly higher than my knee, followed us out on the balcony. She pointed out towards the slums and yelled, “My Home, My Home”. I asked her where, still in disbelief that she could live in these conditions. “Behind that rick-shaw”, she replied, confirming the sad reality of her life and the lives of many many others that live in this dreadful place.