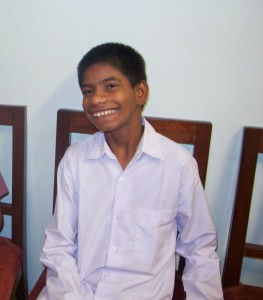 Vednam is 12 or 13 years old. He loves babies, playing, and dancing. Vednam can’t communicate clearly, but he knows how to pour love and affection on everyone he meets. His body is slightly deformed, but that doesn’t stop him from joining the others during exercise and games. He is also blind in one eye, yet he never misses a newcomer and is always the first to greet them.

Maybe that is why his parents abandoned him on the brutal streets of Delhi. Because let’s be honest…taking care of Vednam is a burden. Sometimes he forgets to go to the toilet. Somtimes he cries for no reason. Sometimes he impolitely throws his arms around others and squeezes them in a tight hug…he can’t make his own bed or food or anything. He is totally dependent and most likely will be for the rest of his life. Vednam will never amount to anything in the eyes of the world.

But in the eyes of God isn’t he precious? Isn’t his life priceless? Doesn’t God look on Vednam with joy? Doesn’t God still love him and desire the best for him? God give us Your eyes. Give us Your heart. Give us your vision for Vednam and others like him.