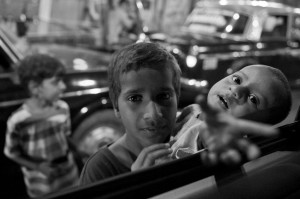 As we sit in the car stuck in traffic or stopped at a stop sign, small children knock on our windows asking for money. There are so many, each looking equally helpless with their disheveled hair, frail bodies, and dust-covered skin.
As I walked down the street a small boy who looked 7 or 8, but was probably 4 or 5 years old, followed me asking me for money. He bent over, touching my feet, then stood up touching his forehead – a symbol of his deep respect. Unable to communicate with him or provide him with money, I placed my hand on his small, dust-covered head, and prayed for God to protect him, and provide for him. I looked into his pale eyes and saw the hope in him. He was not discouraged; he was simply surviving. And he was determined to survive. But I wondered if he knows love, because more than anything I wanted to love him. I held his hand smiling and he smiled back before running off to plead at another foreigner’s car window. photo credit: GFA